From the first Winter Olympic Games in Chamonix to Sochi 2014

With Sochi 2014 now only days ago, we recently came across this great photo on the AP blog website on our searches.

It shows a man representing the United States and carrying the American flag on January 25 1924, as part of the opening ceremony for the first Winter Olympics.

The Games were held in Chamonix in 1924 and this photo was taken on January 25th of that year.

Teams of all the countries took part in a parade from the Mairie to the skating rink, where the events began the following day.


Stay in Vallorcine in the Chamonix ValleyIf you'd like to see more of the venue for the first Winter Olympics then the Bellevue Alpine Lodge offers great value accommodation in Vallorcine.  Call us on +33 (0)4 50 54 60 43 for more details. 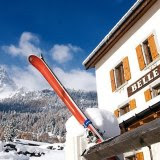